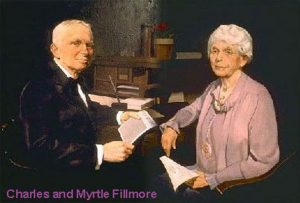 Unity was founded in the early 1890s by Myrtle and Charles Fillmore, not to be a separate church or religious denomination, but as a spiritual movement within religions, dedicated to helping people of all faiths apply positive spiritual principles to better their lives.

In 1886, Myrtle became very ill. She had been “frail” as a child, was sick throughout most of her life and was told there was nothing she could do about it. After attending a lecture about the power of positive prayer, her faith in God became stronger, and she began spending untold hours in prayer and meditation, seeing health and strength for herself, affirming, “I am a child of God, and therefore I do not inherit sickness.”

Within two years, Myrtle was well. She lived on 45 years more, healthy and vital, making her transition at age 86.

Charles had always been a curious sort, reading classical authors such as Shakespeare, Tennyson, Emerson and Lowell as a very young man. He also immersed himself with in-depth study of world religions and philosophies, and in the link between religion and science. Today, quantum physics scientists are discovering this link, finding – and proving – the undisputable connection between the power of the human mind and it’s effect on the body.

Charles and Myrtle began writing about their beliefs, and shortly thereafter, Unity was born. The Unity Movement was started in 1889 with the publishing of Modern Thought, a national monthly magazine devoted to spiritual questions (published today as Unity Magazine). Wee Wisdom, a monthly magazine for children, offering daily uplifting and self-affirming messages, followed in 1893; and in 1894, Lessons In Truth, by H. Emilie Cady, was the first Unity book to be published. Over the years, Lessons In Truth has been translated into 11 languages, including Braille, and has sold over two million copies. It is still in use today as one of the major study guides for Unity.

Using their publications, Myrtle and Charles were able to inform people about the Society of Silent Help, later renamed Silent Unity. For more than a century, people of all faiths, traditions and backgrounds have been calling Silent Unity (1-800-NOW-PRAY) with their prayer requests. Each request is held in constant silent prayer 24 hours a day, 7 days a week, for 30 days.

The first issue of Daily Word was published in July 1924, and has been continuously published ever since. Many people of all faith traditions are avid readers of Daily Word, receiving its positive and uplifting messages for each day, without even realizing it is a publication of Unity.

“Unity is a link in the great educational movement inaugurated by Jesus Christ; our objective is to discern the truth in Christianity and prove it. The truth that we teach is not new; neither do we claim special revelations or discovery of new religious principles. Our purpose is to help and teach mankind to use and prove the eternal Truth taught by the Master.”